I move into the albergue and lay claim to 2 of the last of 4 beds, both upper bunks.  Nysha is not arriving till late from Asurias and I "reserve" her bunk bed with an observance to the rule "first come first served and no reservation". Aife also had a healthy disregard for rules and that, often benefited not only her, but others as well ( see Irish Times article).
The residents, the peregrinos, are an international group. English, German Dutch, Spanish, Canadian and one from the US. It is an easy community in the sunshine with everyone having traveled from other stages along the Camino. Most have walked on the Camino or one of its branches previously,
I feel like a Camino virgin.
It is a community of stories. One man has walked from Bonn in Germany over a 10 year period - don't ask me how far that is but its a very very long way! Another is here to link up with a fellow pellegrino in Ferrol , further down the coast and walk the Camino Anglaise into Santiago. This woman , he tells me had been bed ridden with a serious condition for a number of years and had prayed that if she got better she would walk the Camino. Last year, she managed to get back on her feet and true to her promise, walked the Camino Francaise and was returning to do another this year. Everyone is encouraging.
The albergue is small with shared kitchen and showers and it is unavoidable not to get into conversations with people, except the Spanish who have no English and I soon realise my Spanish is insufficient for this. One of them Alfredo, is in the bunk beneath mine. I have never seen such a collect of plastic bags in one place. Can he not afford a rucksack ? I ask him badly in Spanish, why the plastic bags. He looks at me incomprehensibly as if it is such a stupid question. I later realise that of course it is, and that if it rains along the Camino, as it had been on previous days, the best and cheapest way to ensure your things stay dry is to wrap them in plastic bags .Lesson 1.
However, plastic bags rustle a lot and he is a restless sleeper, resulting in a sensation, similar to travelling on the Titanic in a gale and a  reduced nights sleep.
Always go for the lower bunk. Lesson 2.

Nysha arrives safely and relieved after her long journey down from Paris via Barcelona. We stop off at the bar for some food and catch up time. I have to remind myself that the albergues tend to close down at 10pm so we make a hasty return to our temporary abode. However, as the warden caretaker hasn't turned up, we not only get a free nights accommodation but late night conversations as well.
Alfredo is not amused and makes concerted efforts to check doors, arrange furniture and talk to himself . I notice he does this, when he is not talking non stop to anyone within earshot. We walk with him the next day and he spends at least 30 minutes talking Spanish to us in spite of saying we don't understand. We both come away with different interpretations as to what he was saying.
I think he might have a new condition called Alberguers Syndrome. He means well.

We start early in the new morning. It is not raining and we find our way to the road easily. The journey to Santiago starts here.... 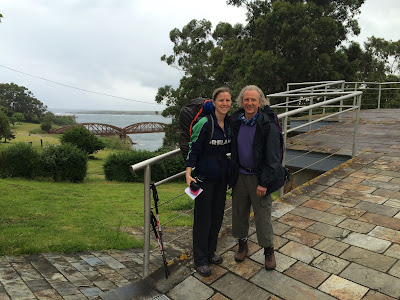 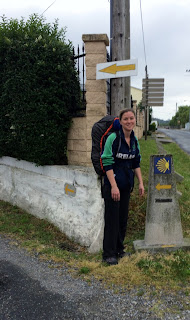 We follow the shell and yellow arrow signs that show the Way. The road soon starts to rise and rise again, which will be the pattern of our journey for the next few days After a few kilometers of tarmac, we soon enter a large eucalyptus forest with tall trees extending on both sides of the trial. The air is filled with the soft scent of warm eucalyptus.
Nysha has the determined stride of someone whose place at the bar is getting cold. In truth I think we are both apprehensive about reaching our first destination and finding a place at the albergue. It quickens our step.
As we I think about lightening the process - difficult with a rucksack that already feels overweight ,
The Teddy Bears Picnic song springs to mind. "If you go down to the woods today, you're sure of a big surprise". The eucalyptus don't seem to mind. Nysha on the other hand it must be said, is not a morning person, at the best of times. There are scowls and grunts. I try whistling instead. "That awful noise should be banned" as she quickens her step. My inner bear feels deflated so I sing to myself.
I discover that the Teddy Bears Picnic makes for a very good marching tune, worthy of  Sousa.
I imagine a line of teddy bears behind me in marching attire, trumpets, trombones, marching drums. My walking sticks form a perfect baton and away we go ..bear right and then bears left ! Quick march..
It's not exactly the pilgrimage image I had in mind but it works 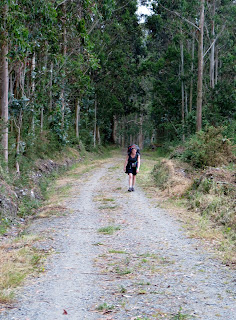 A little later in the morning the grey clears and the sun sneaks through in stages. It is warm but not hot and the trees provide an upward guard of honour,lining our path as they have done for hundreds of years. The day brightens and as we reach the first ascent, our mood brightens too.
We come to a clearing on one side ,where the trees part, revealing a sloping expanse of wood and fields, with mountain ridges beyond. Nysha says its like Switzerl and and it is.
Unfortunately this also reminds her of the Lonely Goatherd song from the Sound of Music.

The hills become alive with the sound of yodel. The birds almost stop singing,the bears go completely out of step and I can't get that yodeling song out of my head !
I wonder if it is the altitude or if a forest of eucalyptus does that to you in the early morning. 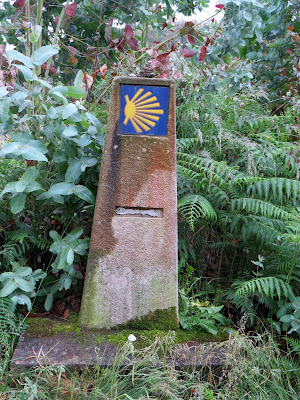 At a turn in the forest path, we come to a fork in the road and there in the ferns is the Way shell, indicating our direction. It is a welcome sign and we agree to place our first shell here as we have attained our first peak and are clearly and distinctly on our way, It is an Aife place, with rich foliage, a mixture of trees and paths leading into the woods in different directions, with many corners, around which she would have loved to explore. 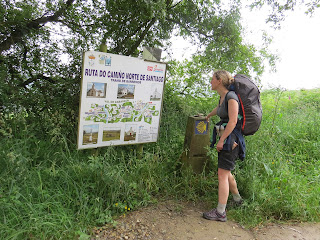 This is one of the few signboards we came across. Completely random and highlighting various areas of interest in the vicinity, the main one to us, being that we were heading in the right direction to Lourenza. 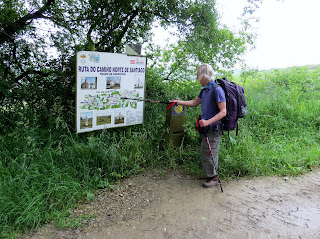 Does my pack look big in this ? 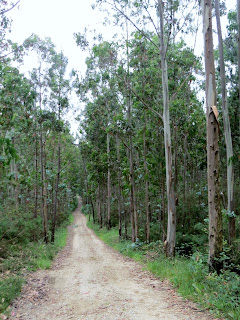 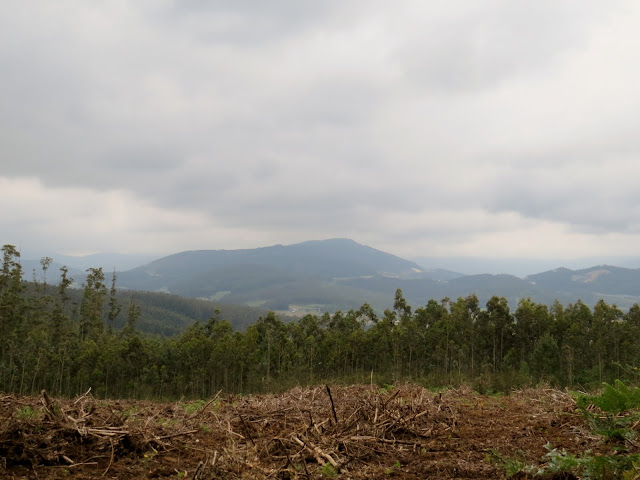 The first stage of the journey to Lourenza was 30 kilometers, mainly uphill to a peak of 325m. We estimated that we would walk that distance in 6 to 7 hours and it had been suggested because of the gradient, that it might take 8 to 10 hours of walking. We arrived at the albergue after 5 and a half hours and are among the first to arrive. In retrospect we have been walking too fast, not having enough breaks and with the apprehension that there may be no beds left at the albergue.
The albergue in Lourenza has 20 beds , though it seems like more and there is more than enough room. It is a bigger version of the one in Ribadeo, modern, clean with a large kitchen and dining area. We choose our beds, bottom bunks, obviously and meet up with the other peregrinos, some of whom we have passed and traveled with along the route.
Everyone is friendly, conversational and sharing of themselves and of what they have with them. Tomas, who has been mistaken for being Swedish but is Swiss, has bars of Toblerone to share,  Nama, who is Israeli brings pistachio nuts and Lars who is actually Swedish has cold meat.  I am thankful and amused and wonder if I should have brought some Guinness as part of my national contribution. We are joined by Jofy, a global traveler and a walking gazelle, who I met on my arrival in Ribadeo and by Dave, who as I passed regularly ( changing his socks as it happens) on the way down, presumed was German or Spanish but turned out to be from Southampton and an informed authority on the Camino, having completed 11 of them.
Never presume you know anything about anyone on the Camino or anywhere else, until you know them.... if you ask me.. Lesson 3.
Everyone speaks English, with two fluent Spanish speakers and this is to form our core group for the rest of the journey. After settling in we head for the bar across the road... as you do.
In the evening, Nysha cooks Spaghetti Bolognese for everyone and anyone and given the amount of leftovers for the other 10 people who didn't turn up. It is delicious, nutritious and in conjunction with the long walk highly conducive to a good nights sleep.