Por qué Camino ? Why the Camino?

In truth,I have no idea but if at any stage, you have any insight please let me know.

If you were to ask me 5 years ago had I heard of the Camino in Spain. I would, like many of the people I mention it to these days, probably have looked blank and perhaps replied to the statement "I'm going do the Camino" with " is that like something off Strictly Come Dancing?".

When I look back, I remember sitting with Aife one day, while she was in hospital and reading to her from some of the lesser loved but highly entertaining periodicals of the type,I am sure you are familiar. You know the  "Grandmother abducted by aliens returns as Abba impersonator and invents oblong Rubic cube" type of thing.
In those times when she was well we would take flights of surreal fantasy to imagine what the aforementioned Granny might do next...Intergalactic Granny Abba impersonators Conventions, Dancing Queens on Planet Granny and the like. There was often hysterics of laughter as our imaginings moved from one absurd, surreal scenario to another.

It was in a hiatus of such hilarity one day that I came across an article on the Camino and one woman's journey towards personal resolution after tragic circumstances.I was taken by the commitment to rebuild and regenerate a Life, that had been in that instance,devastated by loss. The aspiration to develop strength in adversity and move forward with insight was moving.
Aife was touched by it too, in that way of hers, that often acknowledged the plight of others in spite of her own.
A seed was perhaps planted but in the scheme of things I thought no more about it.

There were many changes in Aife over the course of her 8 year illness but one of a small number of things remained unchanged and consistent - her love of walking , forever pursuing what was around the next corner, fearless and tenacious.
These are some of those walks we traveled 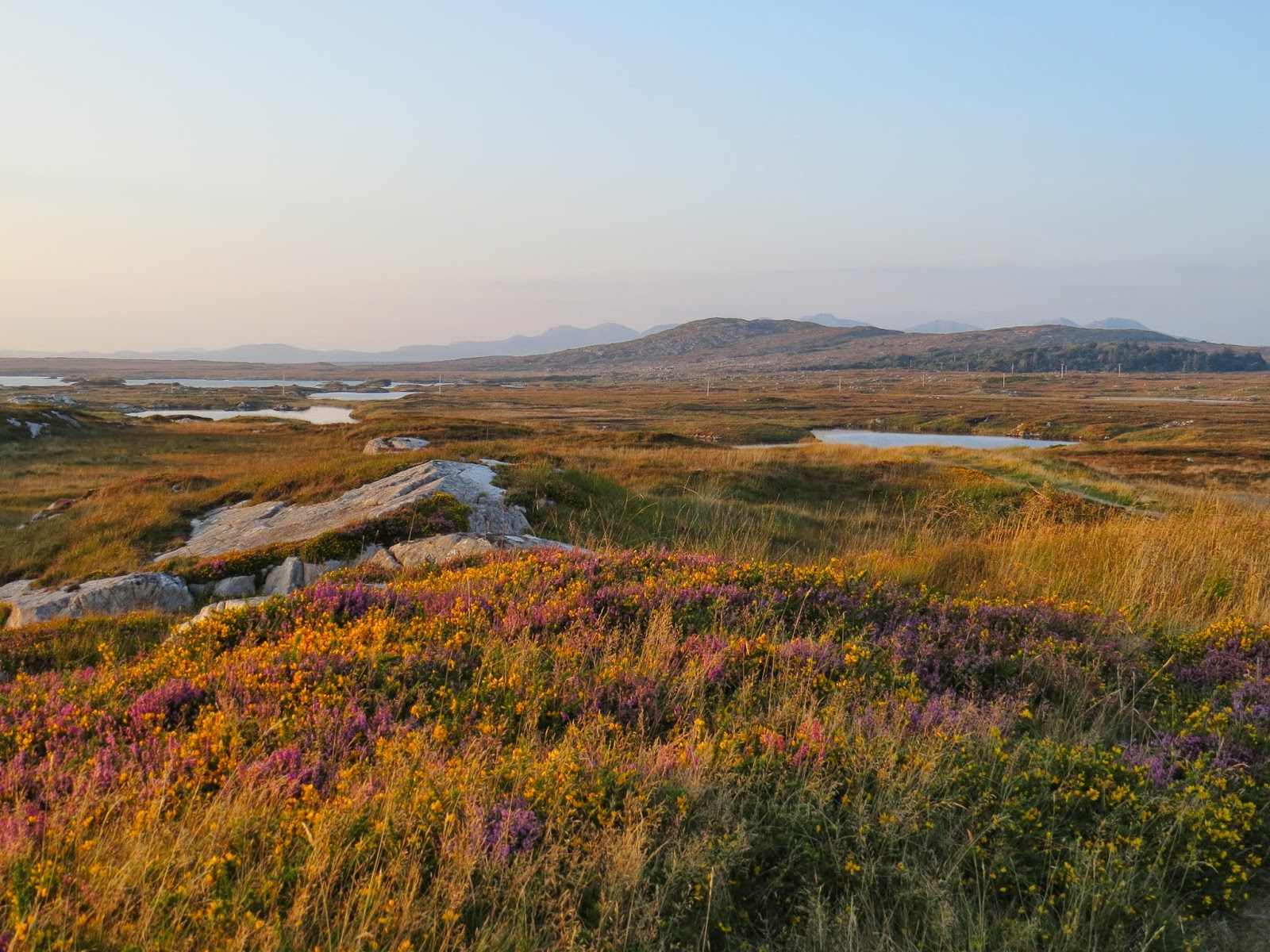 This is the area An Leaca,Collin, Carna,Connemara, above where Aife's aunt Triona rents a beautiful cottage.If you like walking and remote, this is it.

The strand at Salthill Galway 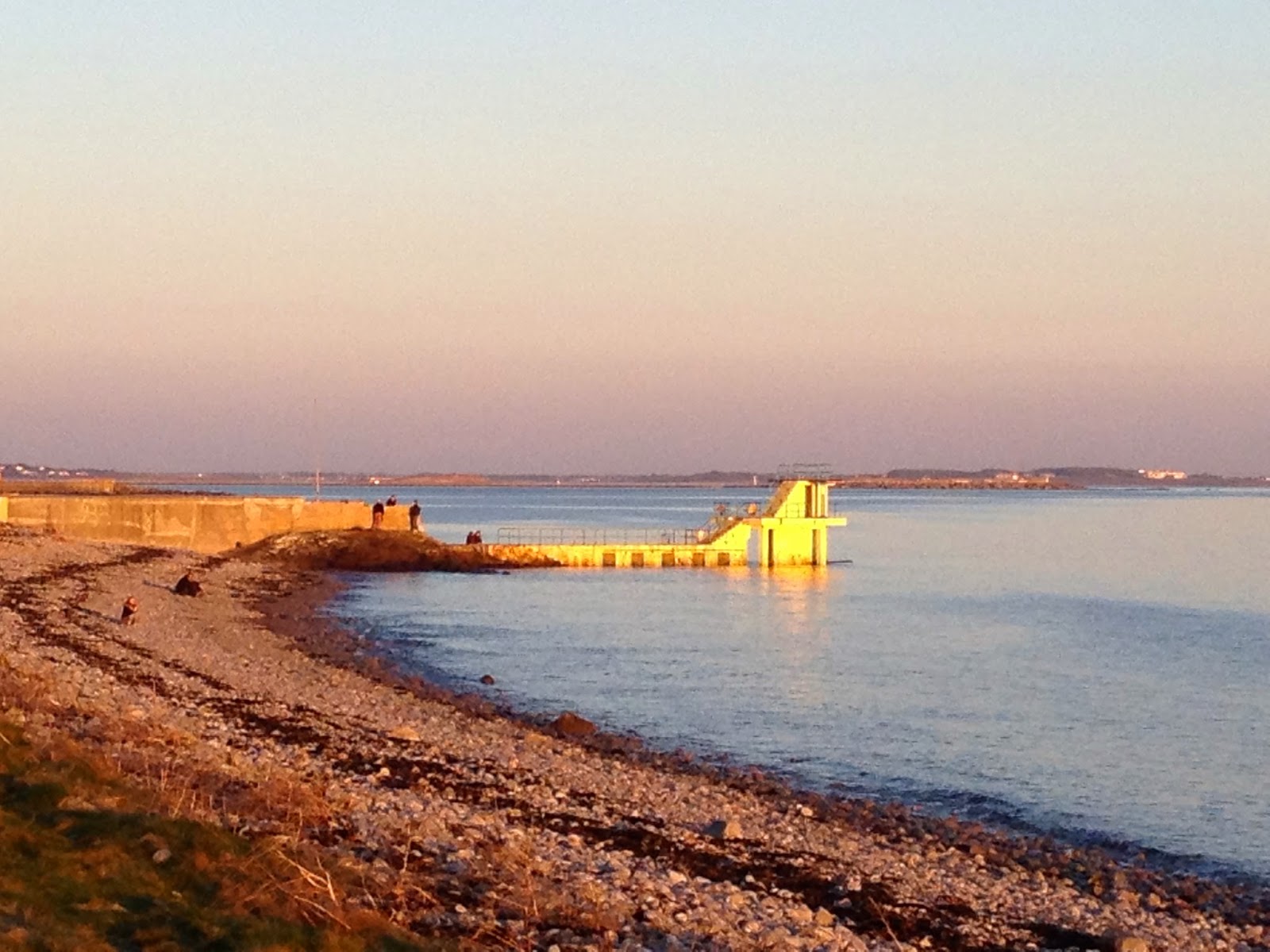 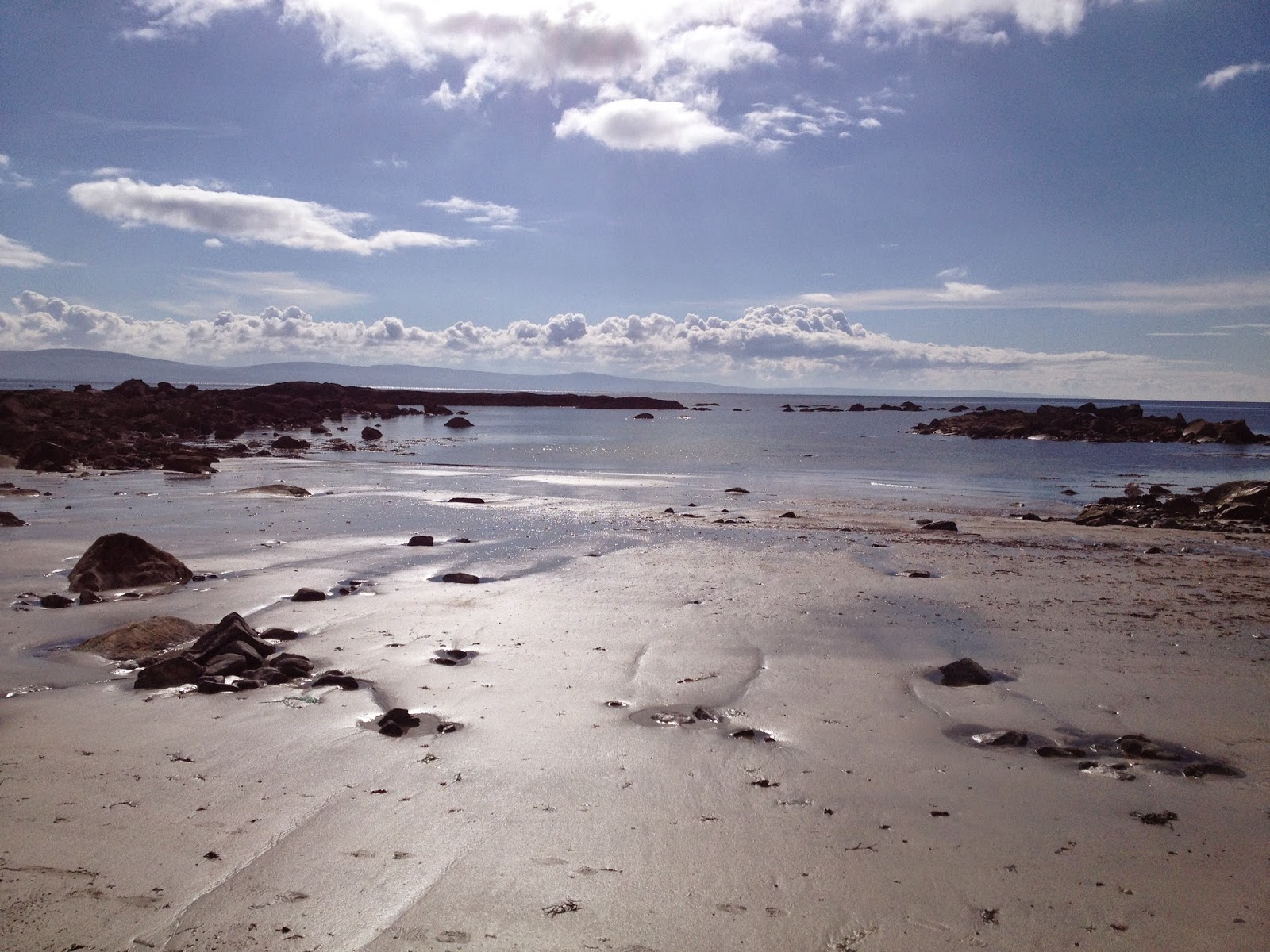 This is near Barna beach Galway

It was probably two years ago, while sitting quietly with Aife in the hospice, having walked around the beautiful rose garden as we often did, that it occurred to me that combining walking the Camino with raising funds for the hospice, that was so ably and compassionately caring for her, was a fitting acknowledgement of Aife, her love of waking and the hospice itself.
I had been thinking what would Aife do if our roles were reversed and it seemed to me very likely she would be looking at ways to create a meaningful contribution out of the circumstance we were in.
Although Aife was very academic,she was equally very community involved and committed, practically as well as theoretically. She helped facilitate various community projects in Galway, where she lived, community buses, gardens and after school services for children. Health and women's rights were also on her agenda and she would often walk on demonstrations in support of civil rights.

This is an Irish Times article written about Aife by Lorna Siggins in October 2014
.
http://www.irishtimes.com/culture/heritage/aife-mcoscair-a-much-loved-and-fearless-woman-1.1978486

A walk of commemoration and contribution seemed appropriate.
I suggested it to Nysha, my youngest daughter with an older head, who loved the idea , in spite of it being not exactly her thing, and so here we are, on the threshold of the Camino. 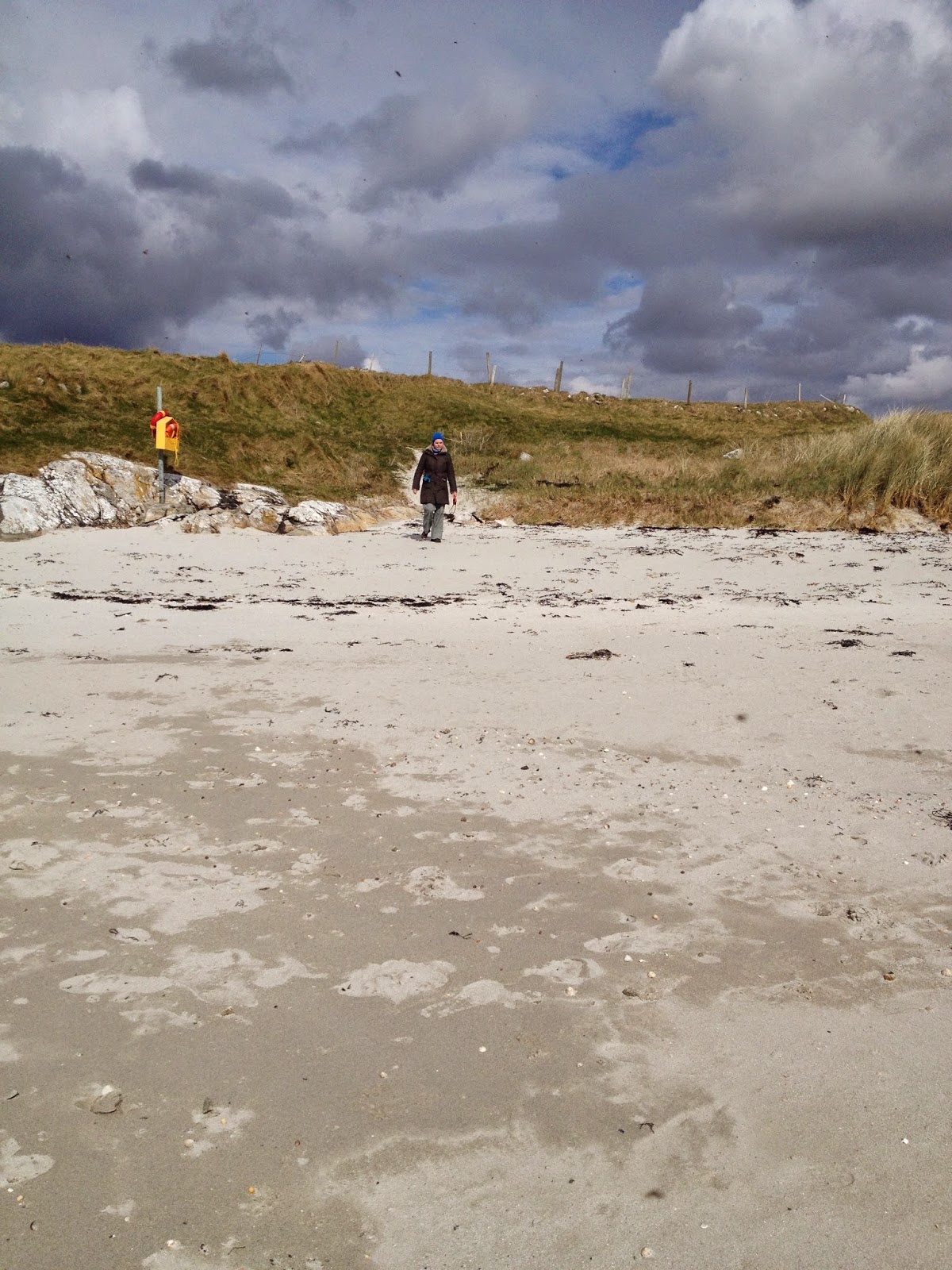 Once the idea of the Camino came up, it seemed as if someone , somewhere, up there , down there, couldn't put it down and references to it kept "popping up" on a very frequent basis. It was, as if, never having noticed the colour green, there suddenly happened to be fields of green everywhere.
There were the articles, the odd, unsolicited references to this Camino thing, there was the movie, The Way and there was also the article randomly picked up about Martin Sheen talking about how meaningful the experience of making this movie was to him and his family. Then there were the patients,some who without personal reference, talked about this meaningful walk, they heard about and then there were the two patients who had walked it and had injuries. The mind can be a delirious facility at times - on the one hand , offering encouragement in one direction and on the other producing tales of woe... as in " Hey Human, this is a Way to go" and then " But you better be careful !! " .

A defining moment was when in August 2012, I went to visit Nysha where she was living at that time , in Camberley in Surrey, for the weekend. On the Monday morning of my departure, we talked, quite spontaneously about the idea of doing that Camino thing at some point and the consensus was that it would be an appropriate even a fun thing ( blessed are the naive) to do" at some stage". I thought no more about it and left to mend my way to London, in the distracting sunshine.

My train that evening at 6.40 or so, was one I had traveled previously on many occasions on my visits to the capital. I enjoy travelling and train journeys particularly ( when they are on time ) so was looking forward to sitting and travelling upwards towards Birmingham and inwards on my ipad. as I had done many times before.....except....
London in the August 2012 was the London in the August of the Olympics and when I arrived, casually and nonchalant at Marlebone station, I did not expect to encounter the crowds of Olympian proportion, steadily streaming onto MY train.

As I squeezed on board , slightly distracted by the satisfying thought that at least I had just about made it on time, ( have I mentioned that there is not a transport vehicle, I have not been late and missed the departure for in my travels - planes and boats and, of course numerous trains), I mused that ,given the level of sardine like compression, the train might just about ground to a halt from its plethora of passengers. Defined, not least, of course, by the nature of that twin headed European beast, of Health and Safety. However, with a shrug and shudder and a tremble of a judder, move it train did, as if. in defiance and disdain of any convention and with an air of confidence in Imperial engineering.
I cannot and will not. for fear of nausea, describe the scene as I moved through the throng along carriages . The heat , the perspiration ( that's a kindly description), the food smells, stains and residues, the air of fulfilled exasperation... and the multitude of the immovable and many squashed together.

Never one to accept the status quo, without due diligence and ever being the optimist , I wound my way through carriages in search of breathing space. About 4 or 5 carriages in, I came cross a man, a proper city gent in pinstripe suit,  busily engaged in paper work but with a briefcase placed on the inside seat beside him. Never being one to deny bringing the obvious to the conscious, I pointed, loudly and said " Is that seat taken?". To be fair ,and apparently mindful of his oblivion, the gentleman smiled, apologetically and hastily moved his briefcase, to allow me to sit down and returned to his paperwork.
Seated,and satisfied at my achievement in the face of adversity, I I did what I often presume, but everyone does in these circumstance s and that is to see what everyone else is doing or at least make up a story on their behalf, The couple opposite were attuned by the nature of their iTunes or at least their connection to what ever was on their phones.
So I turned my attention to the man beside me. He seemed awfully busy, Usually itis a presumption that it is concerning facts and figures and such like. so with the subtle dexterity of James Bond , I turned my attention to what he was doing with these books and charts and notes.
Well, does serendipity, synchronicity and coincidence coincide ?  The books were maps and guides to the Camino from which he was busily taking extracts and making notes

So ever the shrinking violet, I asked him if I could take a photograph of the books as my daughter and I were just talking about doing the Camino that very morning.I remember his enthusiasm as he agreed and told me how he had been planning the journey for a year and how he was taking time out to complete the whole journey, with the support of his wife and family. I already knew that this involved at least 6 weeks commitment and was warmed and touched by his excitement. He talked about his training schedule and how he reorganized  everything so he could take that time out to walk the full Camino.
Unfortunately we only had two stops before he had to leave the train but he left an impression behind and I was infused with a greater resolve to know more about this Camino thing and a greater connection to undertaking it myself.
I have wondered since what his experience might have been and whether it fulfilled his expectant enthusiasm. I hope he had a Buen Camino and that we do too.

Serendipity means a "fortunate happenstance" or "pleasant surprise". It was coined by Horace Walpole in 1754

Synchronicity is a concept created by psychiatrist Carl Jung, which holds that events are "meaningful coincidences"

Coincidence is a remarkable concurrence of events or circumstances which have no apparent causal connection with each other.