It's a lovely day for packing. Though lovely days are very distracting and with the packing I'm slacking. Eventually I get there... with lots of good wishes and good will. 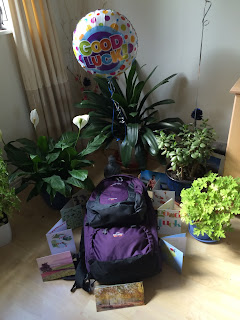 Consequently however, its a late departure. On the way down to stay overnight at Stansted, there is an almost full moon , luminous in a clear blue sky. Clear moon glowing on a river of Sky.
I am reminded of Moon River, a favourite song of Aife's and one she and Nysha and I would sing ( or attempt to sing ) on occasions. The song is from Breakfast at Tiffanys also a favourite of Aife's , and there in the hotel when I arrive is a picture of Audrey Hepburn as Holly Golightly.
Hmm, where ever I'm going I'm going your way.

Some people are owls and stay up late others are larks and get up at the crack of dawn. I have in recent years become an owlark ( JK Rowling is not the only one who can make up funny words) - meaning I stay up late and get up early. This is useful if you have to be at the airport for 4.30 am.
I love Airports and as my brother Aer Lingus William reminds me its often the busiest time in an airport in the early hours. People and stories in motion, a different kind of Camino perhaps.
However I would lime to know the story behind the guy dressed in a Pink Panther top and bright green ladybird print pajama bottoms.Perhaps he was an owlark too and had just met himself coming in as he was getting up for the day.

I fly into Asurias. It is raining. My rucksack already feels heavy enough without getting wet. It's supposed to be Summer and this is Spain.
On the way in to catch the bus, we come to a t junction, with a perpendicular hill rising steeply to the right. It is here,I see my first Pellegrino,the Camino pilgrim, enshrouded in poncho, staff in hand walking slowly upward, rain swept and rain lashed. rivulets of water cascade around his feet and possibly through them. He appears to be sinking into the road.
I have a sinking feeling. Can I come back in the summer ? Please?

After a 2 hour journey, I arrive in Ribadeo, our starting point.
The sun sneaks through and there is a freshness in the air. I breathe a sign of relief.
Ribadeo is a delightful coastal town and the long hours of daylight allow me to explore the town and area. Most importantly it allows me time to find the albergue or traditional hostal where Nysha and I will be staying tomorrow evening so that we can officially start out Camino the following day,on the 3rd June. 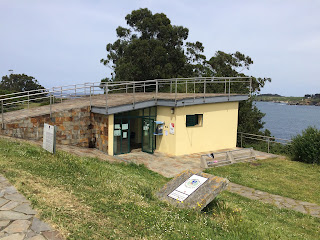 The Albergue at Ribadeo. The albergue is the traditional resting place for the Peregrinos or pilgrims on the Camino. They are dormitory style mixed accommodation with bunk beds and shared showers and kitchen.This one has 12 beds and I was surprised by how modern it was and how cheap, at 6 euros a night. There are other types of hostels and more expensive accommodation but we have chosen these because of their traditional connotation and because we want to raise as much money as possible for the hospice and could not justify the more costly options.
The downside is that they function on a first come first accommodated basis.

As I have read it is not that well indicated, I walk and trace our route out of town onto the Camino itself. I breathe more relief.
I stay in the hotel Eo, where the owners are lovely and very helpful in spite of my lack of Spanish. They proudly tell me of a natural rock formation further up the coast called As Catedrais ( the Beach of the Cathedrals) .
A local tradition is to travel from this natural Cathedral to the Cathedral in Santiago de Compostella along the Camino Del Norte.
I visit the next morning, as Nysha is arriving in the evening. It is a stunning series of overhanging rock formations that stretch out into the sea. They can only be perceived clearly when the tide is out, so arrival timing is important. 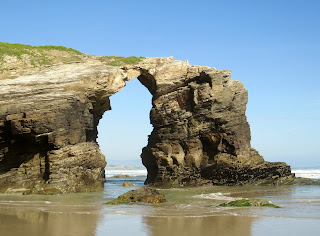 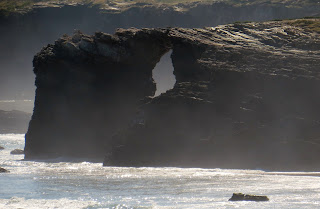 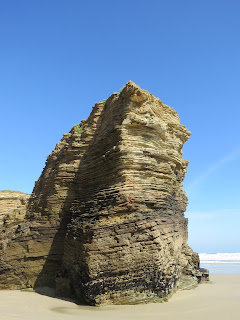 I walk through these natural archways and think of the hundreds if not thousands of years they have been in development. As the tides ebb and flow, so too do they change and renew each day. Sometimes this change is imperceptible, sometimes it is significant but there is always change. Just like Life itself., if you ask me.


As I wander around these natural archways and squeeze through crevices in the rock, which at times seems like it too breathes a sigh of relief to be release from the onslaught of the impending sea, I hear the sound of a wailing bagpipes.
I begin to think I have some air compression disorder, until I come across a piper standing still in a cave by the shore. The cave forms a natural auditorium and the acoustics are superbly clear.
I wonder if I am being piped onto my Camino. 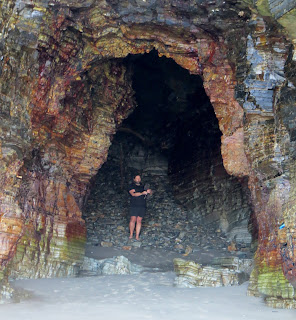 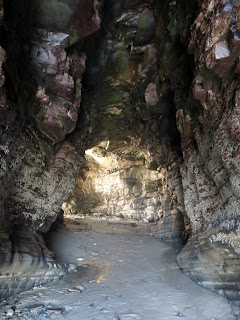 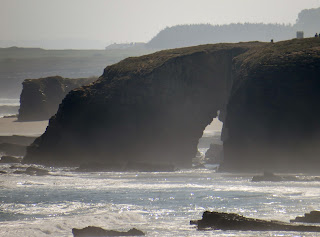 As Nysha is not arriving till the evening, I walk a 10K warm up for our start tomorrow. The area around the albergue has a coastal path and access to various beaches. It is very picturesque in the afternoon sun. At the end of the headland there is a lighthouse and a grass area to sit and contemplate on the journey ahead.
Breathing in the warm sea air I am mindful of maintaining a focus on our intention and honouring the Life force that was Aife. We have already raised the target fund for the hospice. It is 3000 euros and rising and it is relief not to have to think about it.

I look back on the initiation of this journey,the conversations with Aife about traveling, her wish to travel to New Zealand, and her indefatigable love of Life. I think on the decision to do this walk with Nysha as a commemoration of our time with Aife and our respect for the contribution she made to our lives.

That time was a harsh and a sad time but also a special time of much laughter, exuberance and jubilation at each additional day she spent with us over those 8 years. I look back on that time and remember the humour, the lightness of being in physical adversity, the songs and the dancing and also those quiet times of  reflection and the peaceful stillness that is invoked at the end of ones time.

I am clear that this is not a journey about grieving but an opportunity to focus on the celebration of Life in a way Aife would appreciate in that inimitable way of hers -"sure, could you not run it while you're at it ! And who's going to be  the first one to the bar then ? ".
I have brought 9 shells from Connemara, where aife spent much of her time. We will lay them at various stages or places that remind us of Aife, her Life and of the passage of Time.
I have picked a small triangular stone from the beach at As Catedrais to carry and lay at the end of the journey. Later, I pick a larger stone from the beach at Ribadeo. I'm not sure why.

As I sit and meditate, I am not sure how that is going to manifest over 200K of mountain and hill terrain. There is an expectant apprehension. I breathe deeply and the apprehension becomes anticipated excitement. A butterfly appears and dances around the flowers. 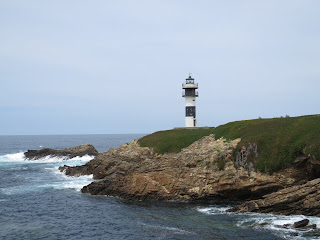 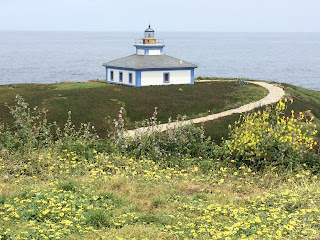 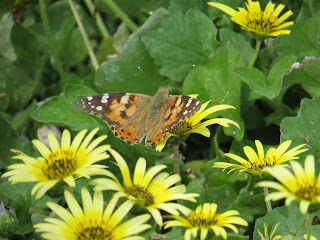 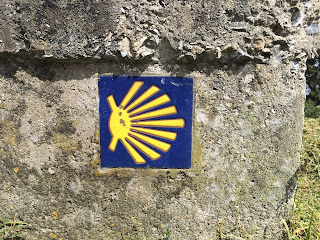